I was watching James May’s TV programme the other night about trying to break a world record by flying a freeflight model glider across the English channel and it stirred up several emotions in me both happy and sad.

Sad because my Father is no longer here but has been gone to the great hobby shop in the sky for ten years now and happy because when I was younger I had those magical moments with him in the garage building various model aircraft out of Balsawood (the airframe), tissue (the skin) & dope (it stretched the tissue over the frame), followed by the test flight and the inevitable crash after weeks of work.

That didn’t matter, what did was the fact that we had that precious and irreplaceable time together as father and son doing something we both loved: making stuff work! 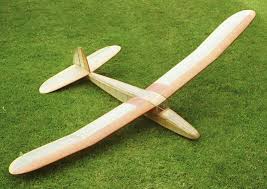 I am a session bassist and contemporary composer based in Ireland, most of my studio work these days is done from my own place via Dropbox etc. I am also a member of Derek Ryan's touring band. I play Double bass and Bass guitar and most recently a derivative of the Chapman Stick, the NS Stick and several other instruments when I must :-) I have two solo instrumental albums on release called "End of a longer day" and "A small shadow" and my sister Susan and I are currently writing and recording a series of Audiodramas/Books called the The Todalie Stories, a series for kids of all ages including adults that refuse to grow up. comprising Text, Audio & Illustrations (by Vitya Malirsh), inspired by special people, the unseen little folk, and other fantastic creatures that inhabit the woods, streams and lakes on this island . The stories explore the concept of triumph over adversity and illustrate the importance of inclusiveness, the powerful impact of community spirit, bringing together disparate groups to achieve a common goal in a respectful inclusive space. The first story (abridged) is available as a Podcast called The Todalie Stories on all good podcast providers and on www.todalie.com. I am also currently involved in several exciting writing projects so watch this space! View all posts by James Blennerhassett

A girl travelling around the world on a motorcycle.

and her little world

FABULOUS OUTDOORS Blog - sharing the passion for the outdoors!