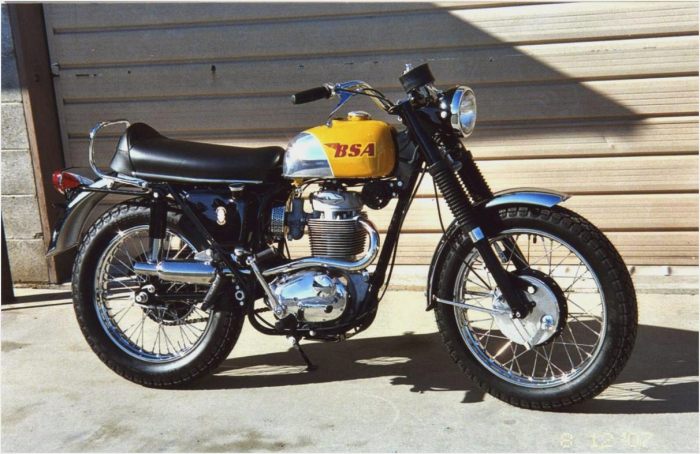 The compression ratio on this single cylinder engine was so high I couldn,t kick start it with my slight 5’6″ frame and so had to run down the road and jump on the saddle while releasing the clutch in 2nd. gear to get the beast started.

It was loud, it leaked oil everywhere but great fun to ride until one day whilst riding to Sligo from Dublin with my good friend Mark Heather on the pillion, the engine decided to explode internally and leave us on the side of the road near Mullingar 😦

No parts being readily available for BSAs as the company had closed, I had had to scrap the 441, so sad (I actually swopped it for a Fiat 124 …shocking!) & so ended my early bike career.

There is an upside to this tale though, the BSA name has been bought by Mahindra, an Indian motorcycle co. and they are going to release a range of new BSAs….starting with (You guessed it) a 500c.c. single!

The Beezer is back 🙂

I am a session bassist and contemporary composer based in Ireland, most of my studio work these days is done from my own place via Dropbox etc. I am also a member of Derek Ryan's touring band. I play Double bass and Bass guitar and most recently a derivative of the Chapman Stick, the NS Stick and several other instruments when I must :-) I have two solo instrumental albums on release called "End of a longer day" and "A small shadow" and my sister Susan and I are currently writing and recording a series of Audiodramas/Books called the The Todalie Stories, a series for kids of all ages including adults that refuse to grow up. comprising Text, Audio & Illustrations (by Vitya Malirsh), inspired by special people, the unseen little folk, and other fantastic creatures that inhabit the woods, streams and lakes on this island . The stories explore the concept of triumph over adversity and illustrate the importance of inclusiveness, the powerful impact of community spirit, bringing together disparate groups to achieve a common goal in a respectful inclusive space. The first story (abridged) is available as a Podcast called The Todalie Stories on all good podcast providers and on www.todalie.com. Currently studying Music Composition for Games in Griffith College Dublin, I am involved in several exciting writing projects so watch this space! View all posts by James Blennerhassett

A girl travelling around the world on a motorcycle.

sharing the passion for the outdoors!

Your Source For The Coolest Science Stories